Laserscans and photography generate point-clouds. After connecting the singular points (‘meshing’) of the point-clouds, pictures can be created from laserscans, which give a similar impression to normal photographies, but the viewer can move inside a 3-dimensional model-space. 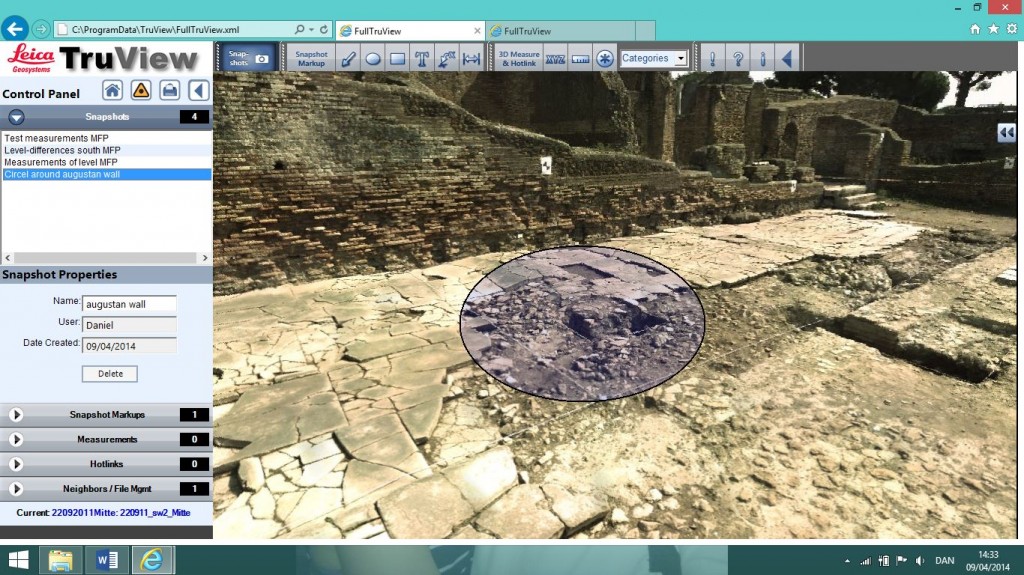 Measurements are taken relatively from the standpoint of the laserscanner. When the point-cloud is geo-referenciated the measurements would resemble to world-coordinates. For our example (see picture below), it is sufficient to use relative measurements to answer important questions regarding the shape and size of the portico MFP, its building-processes and -phases. Slabs, which were laid directly on top of a solid wall of a predecessor-building, show the original height of the last visible pavement (see picture above: blue-transparent circle), 2.30 m ASL (which corresponds to the relative measurement of – 1.799 m below the position of the laserscanner). 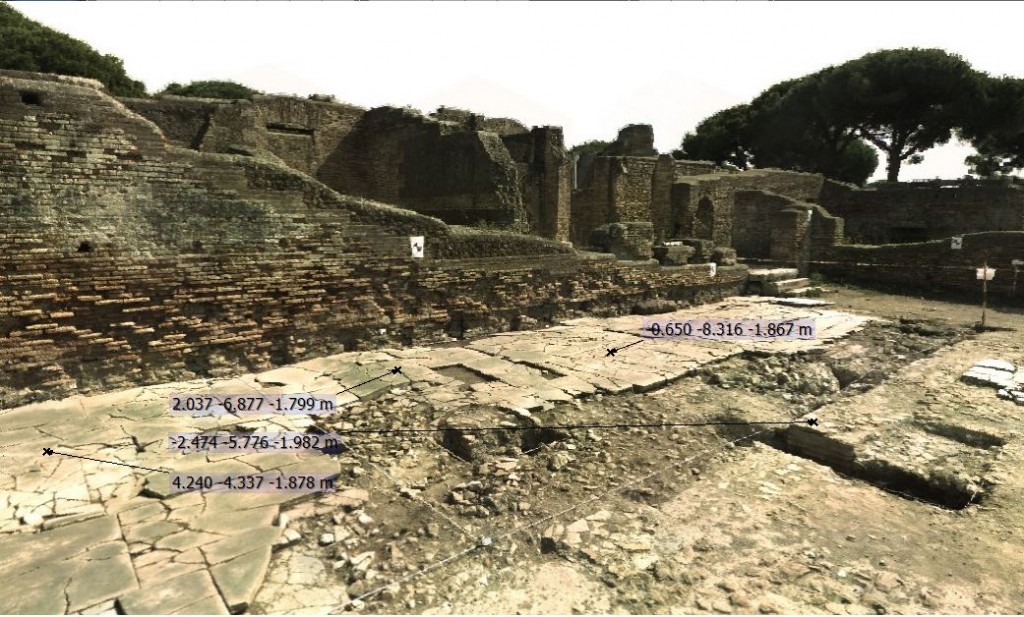 In all areas around the predecessor-wall, the pavement had sunken irregularly. Due to geo-physical scanning, we know that this process happened due to cavities in the underground and the irregular density of filling-material underneath the slabs (see picture below: the irregular black areas are cavities). 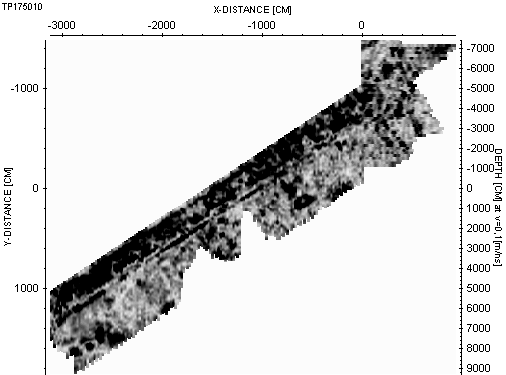 By comparing the heights (the last number in the coordinates, highlighted in transparent-blue in the pictures), we are able to distinguish, which parts of the pavement were laid at the same time or in the same building-process, even if they were seperated by areas of later robbing-activities, collapse-catastrophes a.s.o., which are characterised by an irregular rubble-surface that is visible in the picture below. 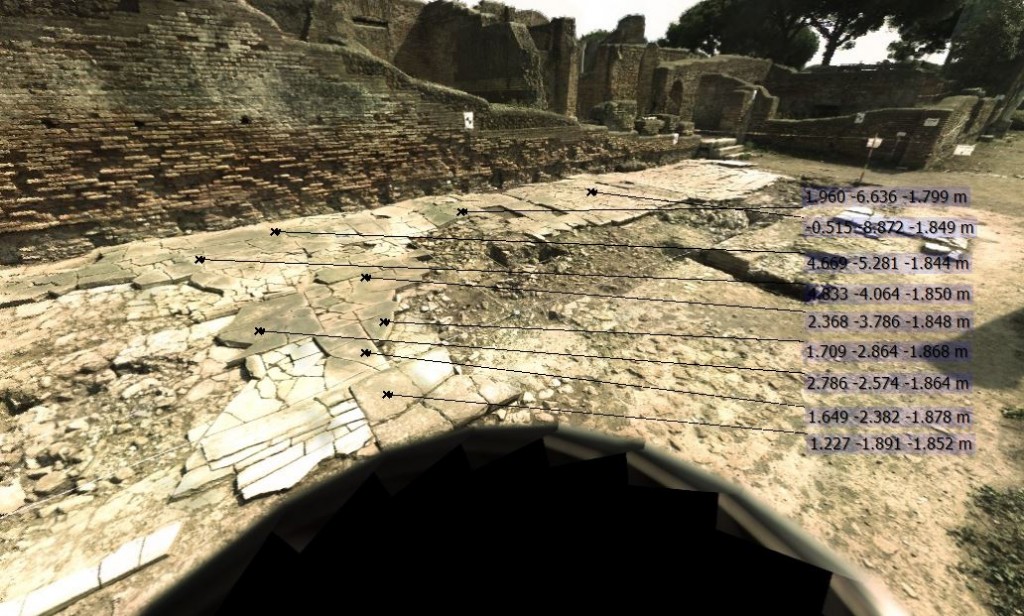 A few slabs in the foreground in the picture above, were built on top of a very solid and regular fill. This fill can be defined as one single building-process. Our question concerned whether these slabs had the same height as the slabs closer to the backwall, which were laid on top of a very irregular fill containing broken wall-fragments from an earlier portico-phase (see picture below). If this could be verified, both areas would have been part of the same building-phase. The fundament of a statue-base that has the relative height of -1.852 m, which is 2.25 m ASL, can be verified as part of the last visible pavement on the picture above. By comparing it with the other pavement slabs (see picture above), which were all more or less within the same original height, we find a certain tolerance of about 5 cm, due to the several collapse catastrophes and obviously the consequences of at least one major earthquake. 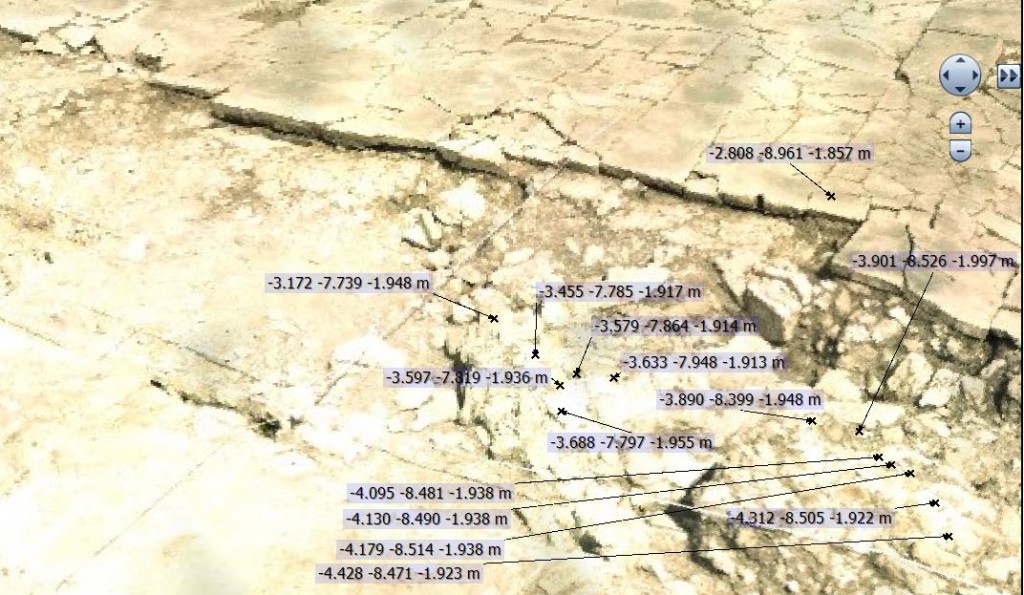 It is very practical to take any kind of measurement in the 3D-model space as it would be possible on site (see picture below: the distance between the portico MFP and the Imperial Basilica, MFB). The old plans of the excavations are very schematic. These plans are based on the assumption of right angles in almost all corners of buildings. In reality, orientations differ and right angles are very rare. Hence, if you would use these plans for measuring, there would be errors of more than 40 cm in the Forums area alone. For the interpretation of specific Forum concepts, (concept meaning different buildings belonging to the same architectural plan), it is fundamental to have the exact measurements. The Roman architects and builders normally worked very exact, which is why it is possible for us to define, which buildings with the same orientation would be from the same building phase or which relations between different buildings were intentionally planned by the Roman architects. 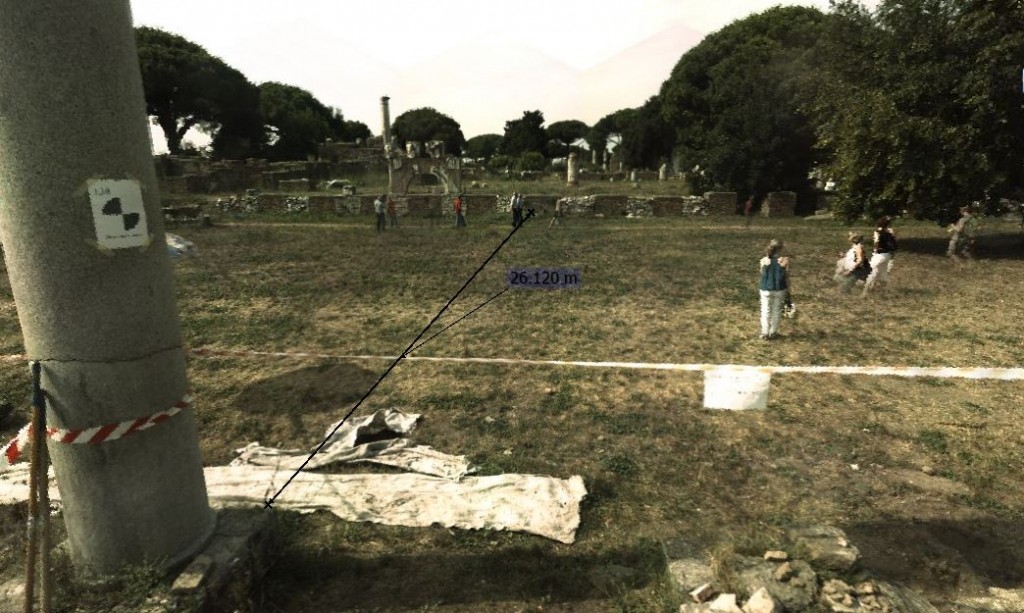 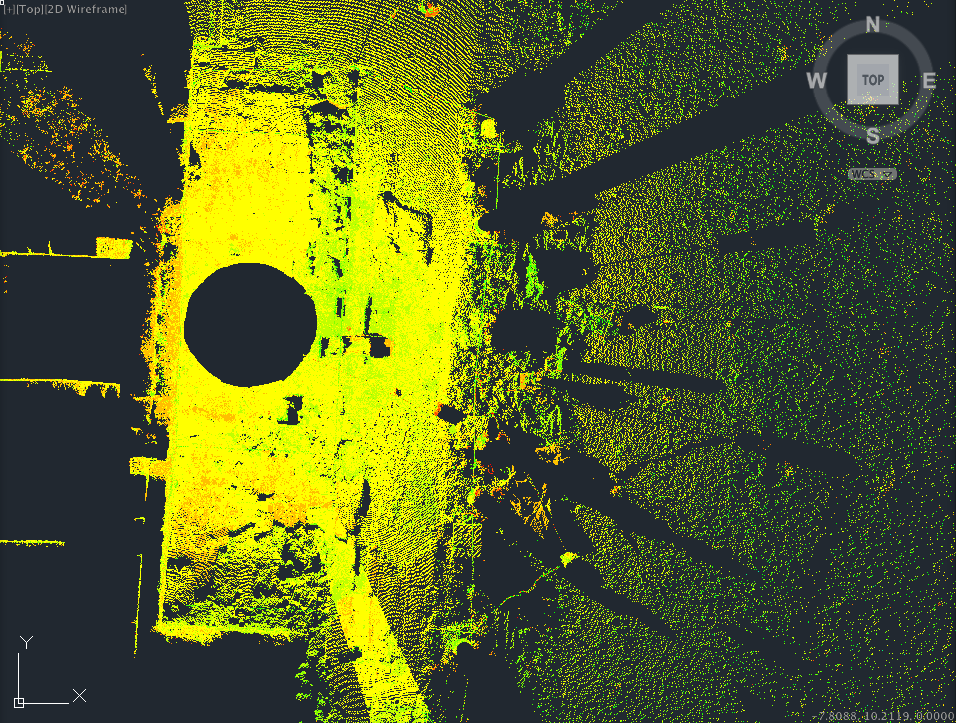 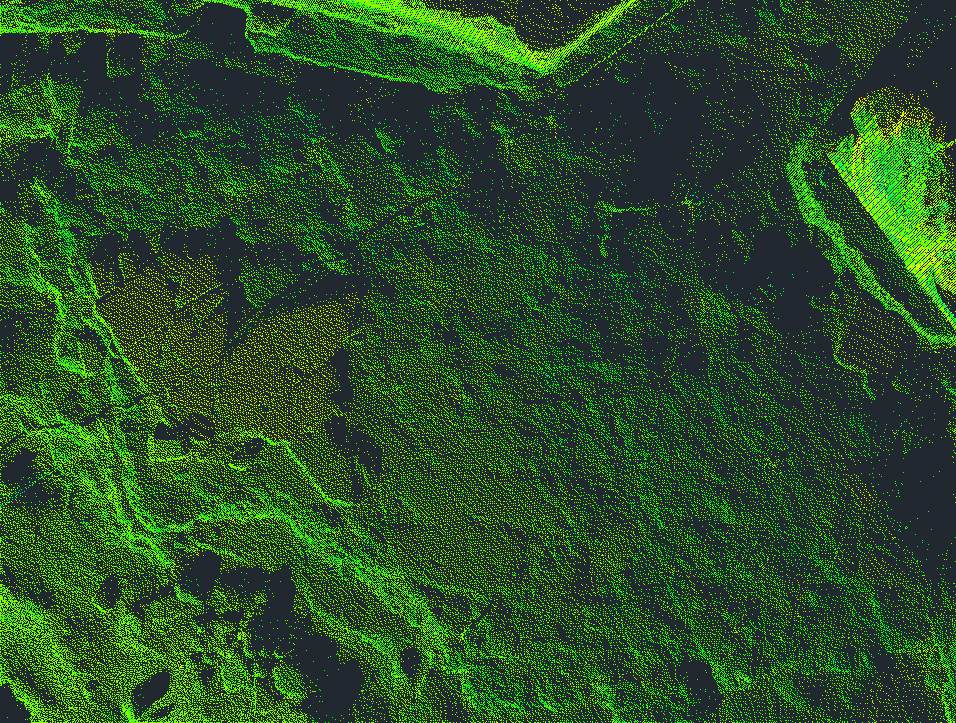 When the Roman architects built the Late Republican temples in the northern part of the Forum, they used the same orientation as the Cardo. When around 50-80 years later, the Augustan architects built the Temple of Roma and Augustus (TRA), the Late Republican temples were still visible, but a new orientation was intentionally selected , which differed a few degrees. The same is valid for all following Forum concepts from the 1st until the 5th century CE. Detailed studies of this phenomenon are in progress. 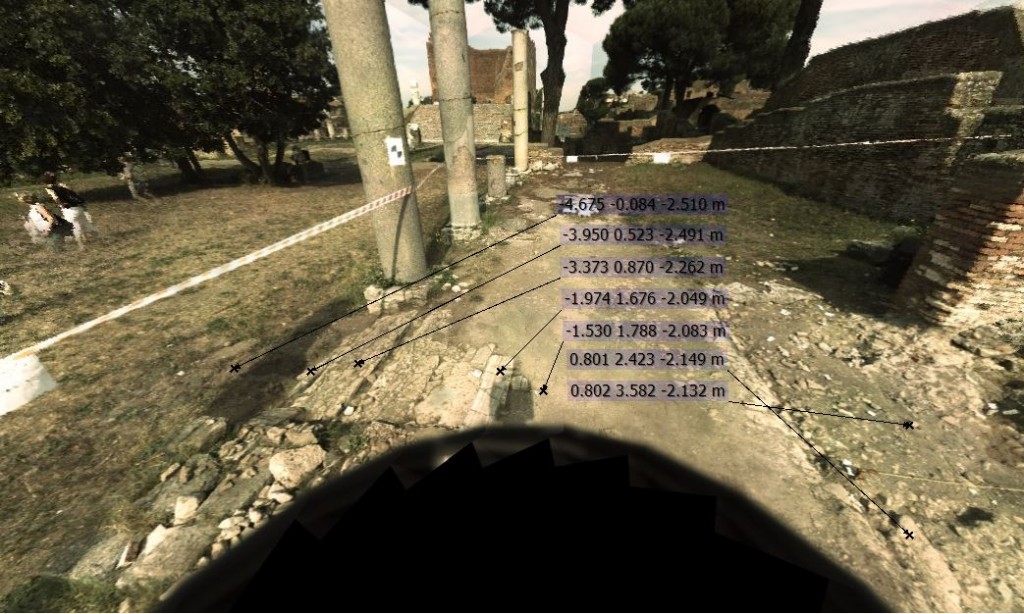 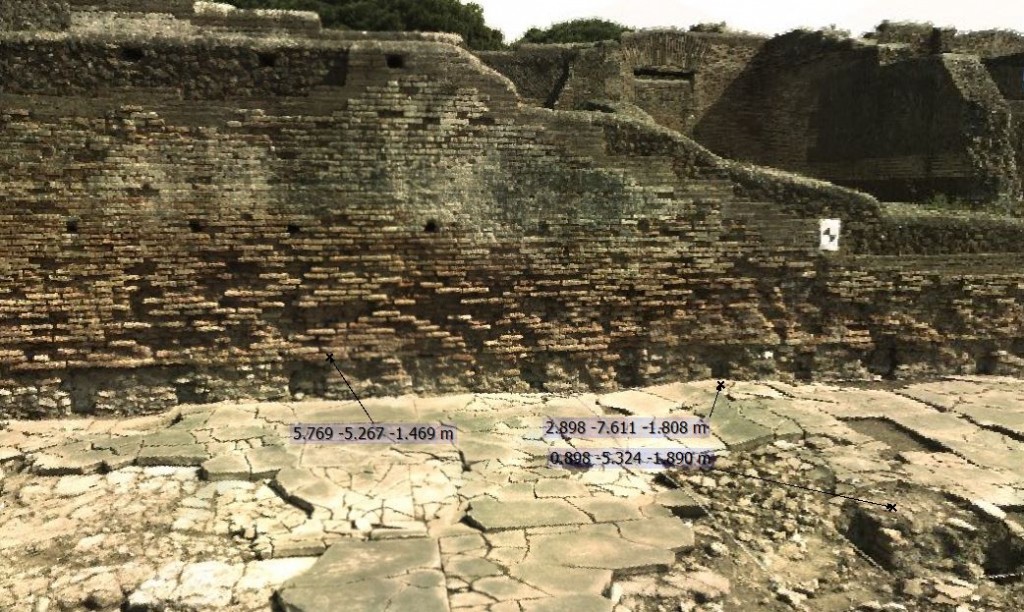 In the attempt to distinguish different layers and building phases horizontally, the laserscans are useful to draw sections. In Ostia, raising the street levels are a typical phenomenon to prevent severe damage due to the regular Tiber floodings caused by the melting snow in the spring time. These level raises can be sorted chronologically and therefore, in Ostia we have the chance to date buildings by the absolute height of the fundament. In the picture below, the two red lines highlight the different levels of the pavement of MFP and the level of the Forums plaza. In one trench, we could document the horizontal and vertical development of the portico through time (see e.g. the section Trenches in 3D). Because obvious traces of stairs are missing in the last phase, initially we had the working hypothesis that the latest Forum level (almost) was at the same height as MFP. During the excavations of the 1930’ies, the latest levels of the Forum’s plaza were almost completely lost.

However, a surface cleaning in 2013 around the central round monument of the Forum (MUN), and the measuring of the few preserved slabs next to the inscription of Attius Clementinus (ACL, see pictures below) along with the stairs of the later removed portico in front of the Imperial Basilica (MFB), brought the last evidence of these lost Forum levels to light. By using laserscans, we can define and vizualise all these relations between the Forum’s plaza and the surrounding buildings in an easily comprehensive manner. 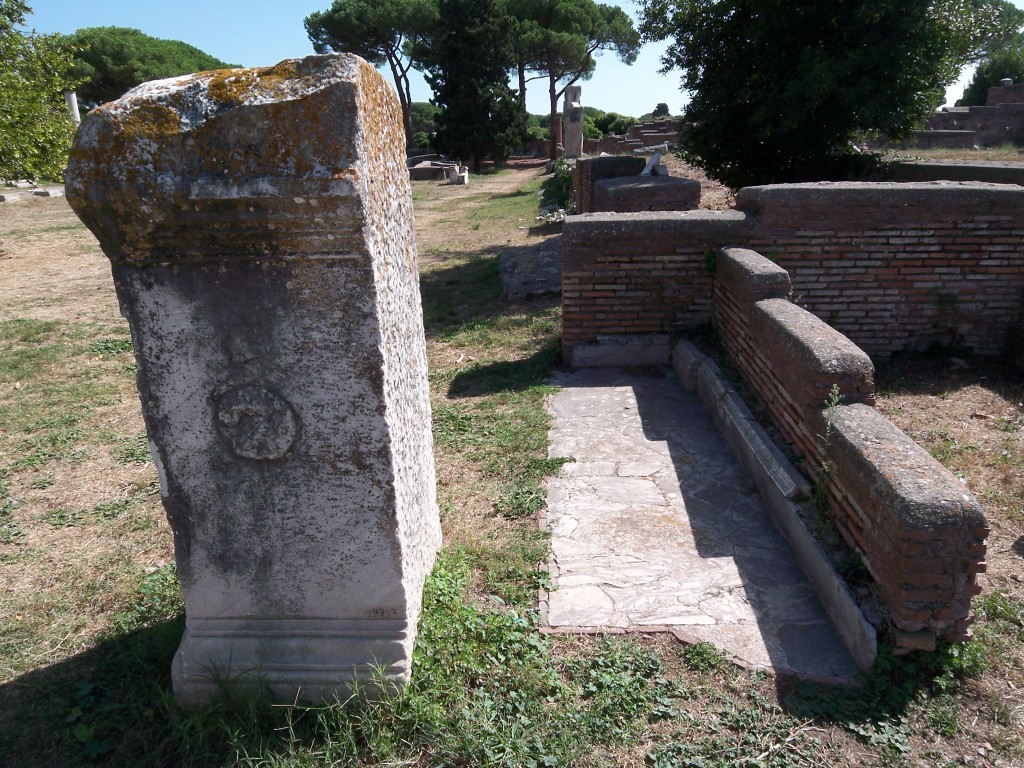 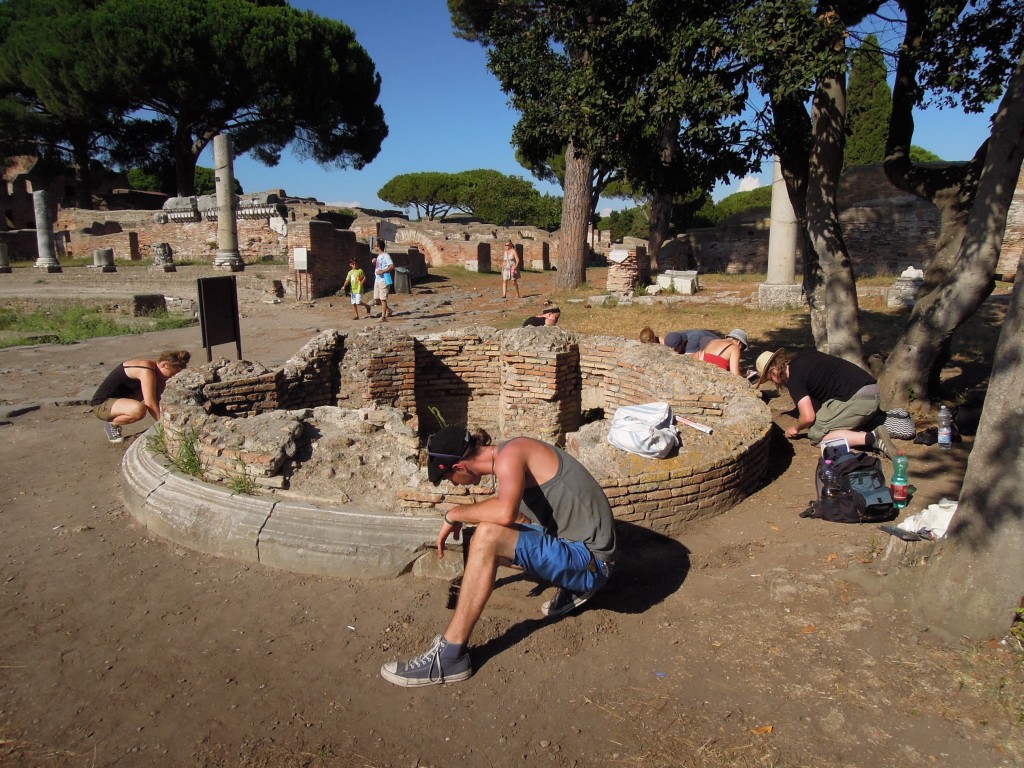 Coordinates from the laserscans enable us to measure the different layers, fillings and architectural structures inside the trench, and compare these with levels on the portico and on the Forum’s plaza (see pictures below). Of course, levels can be taken in the traditional way by hand too, but the advantage of the laserscans is the complete free choice of measuring points in the 3D space – even in the post-excavation work. 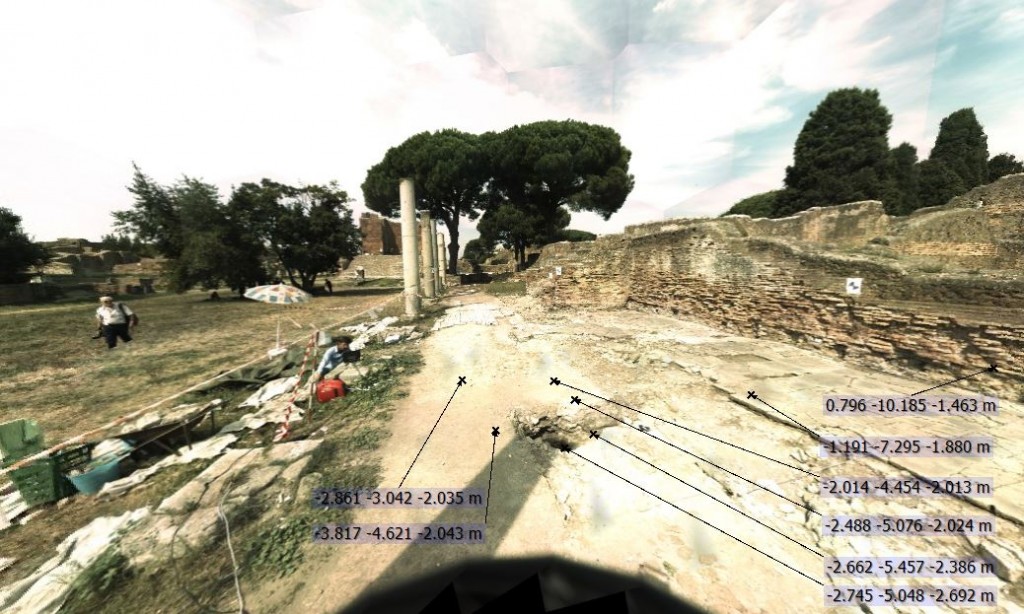 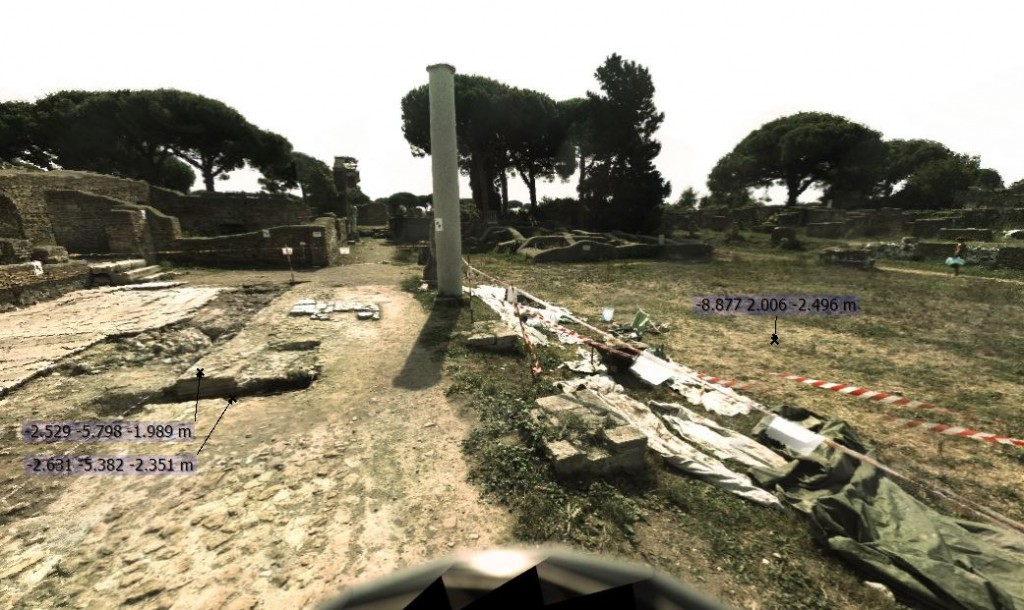 In the pictures below, we can measure the difference of 15 cm between the fundament of the backwall and the fundament of the apse. This could demonstrate the different time of construction of both structures. Until recently, it was believed that the whole portico MFP was built in one singular phase in Hadrianic times, but the exact measuring of the fundament levels shows a much more detailed building history, starting with the apse as an independent architectural structure of a previous unknown Forum concept from the 1st century CE to the latest additions in the 5 century CE. The latest level inside the apse is further 15 cm lower than the fundament of the apse, but still 15 cm higher than the level of pavement outside. It is not random that measurements of 15 cm occure in many contexts, because the Roman measuring units were palmus and feet, with one Roman palmus being 7,4 cm and one Roman foot being 29,64 cm, thus 15 cm equals two Roman palmi or a half Roman foot (these standard units are also visible in architectural planning – for example on the marble roof tiles or all other decorative architectural elements). 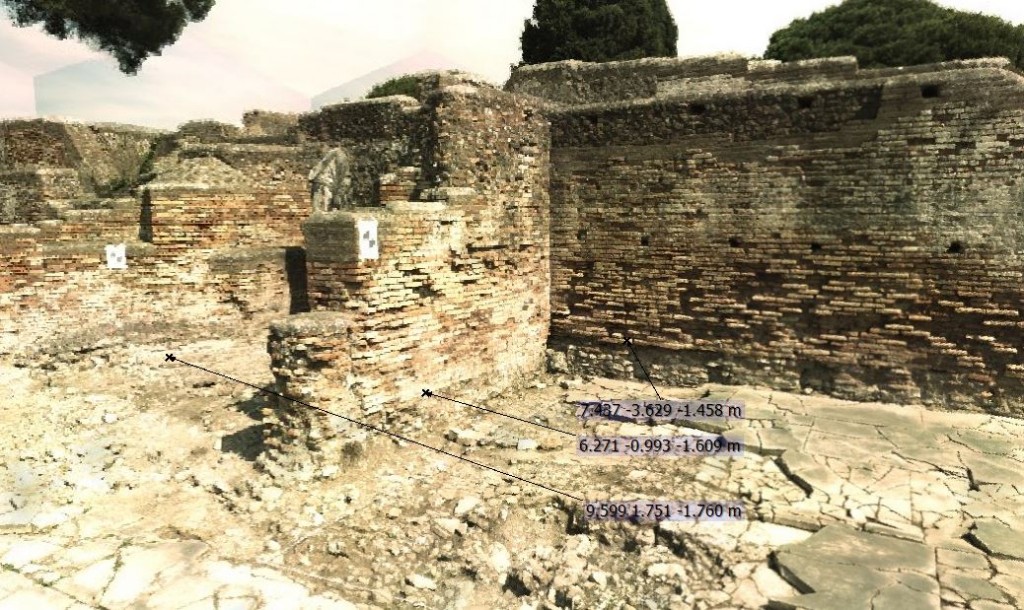 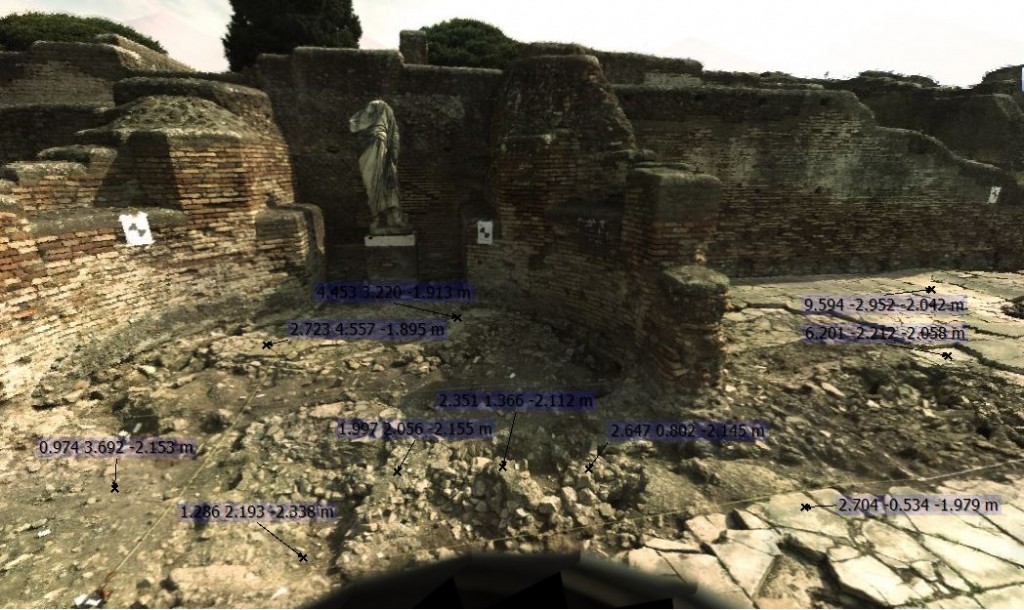 Since 2014, we have not been using laserscanning, but utilised the advantages of photogrammetry instead, since this can be obtained through all types of cameras. You can read more about it here.