This section is dedicated to specialists. Our aim is to provide a discussion-forum about the possibilities and limits of dating based on the level-raises of the streets and buildings in Ostia.

If you are a researcher, and you have any information about level-raises from your experience or from older unpublished excavations and trenches, then feel free to contact us by email!

We look forward to a fruitful discussion, because sharing information and knowledge is a ‘win-win’-situation: with every new parallel to the phenomenon you can cite, research becomes more comprehensive.

We start with one example: theories of so-called ‘Flavian’ and ‘Hadrianic’ level-raises. This phenomenon is discussed at the Piazzale delle Corporazioni and its immediate surroundings, the theatre (for example, see Battistelli P. – Greco G. 2002). At least one would expect similar level-raises at all other major plazas and streets in the city. 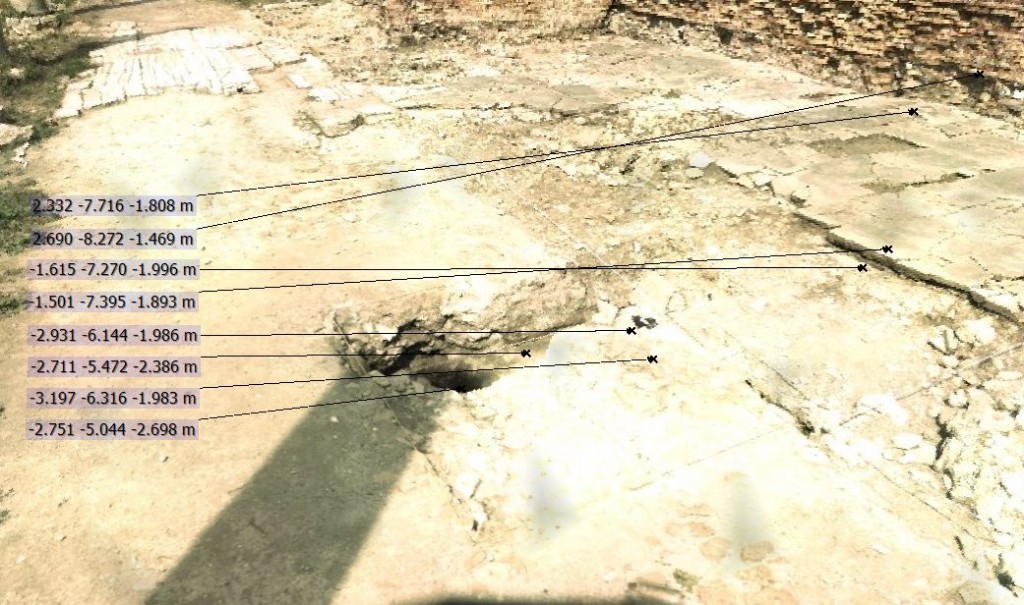 Felix Hülsebeck is curently working on his master’s thesis regarding the stratigraphy of his trenches from 2011-2012 at MFP. In this regard, comparisons with other trenches in the Forum’s area, Forum’s Basilica and Forum’s ‘Curia’ will be very interesting.

From the bipedales-level of a predecessor-building underneath MFP to the cut off top of the pillars of the same predecessor-structure there is exactly a difference in height of 40 cm (see picture above – compare the two measurements: -2.386 m and -1.986 m). The interpretation remains open if the differences of levels are due to a singular event of filling, or several different building-phases. Was the layer, predominantly consisting of basalt-fragments, part of the same preparation-layer of a pavement as the surface-layer? Was this surface-layer in the whole portico the same? Directly underneath the present walking-level, we have found a regular tuffelli-level at the same height as an irregular level of tuffelli, marble fragments and ceramics including roof tiles above it (see second picture below). A very thin layer of earth and roots in between this tuffelli-surface layer and the basalt-layer could demonstrate either influences of modern vegetation since the area was first excavated in the 1920’ies, or certain timespan between two different building-phases (see pictures below) 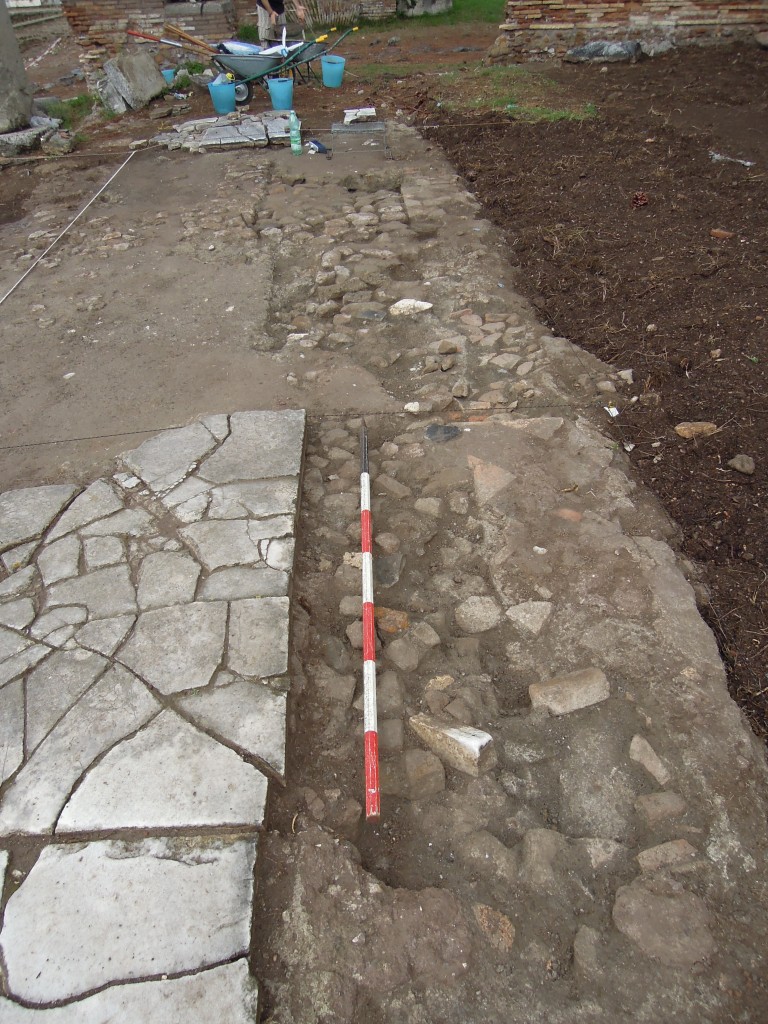 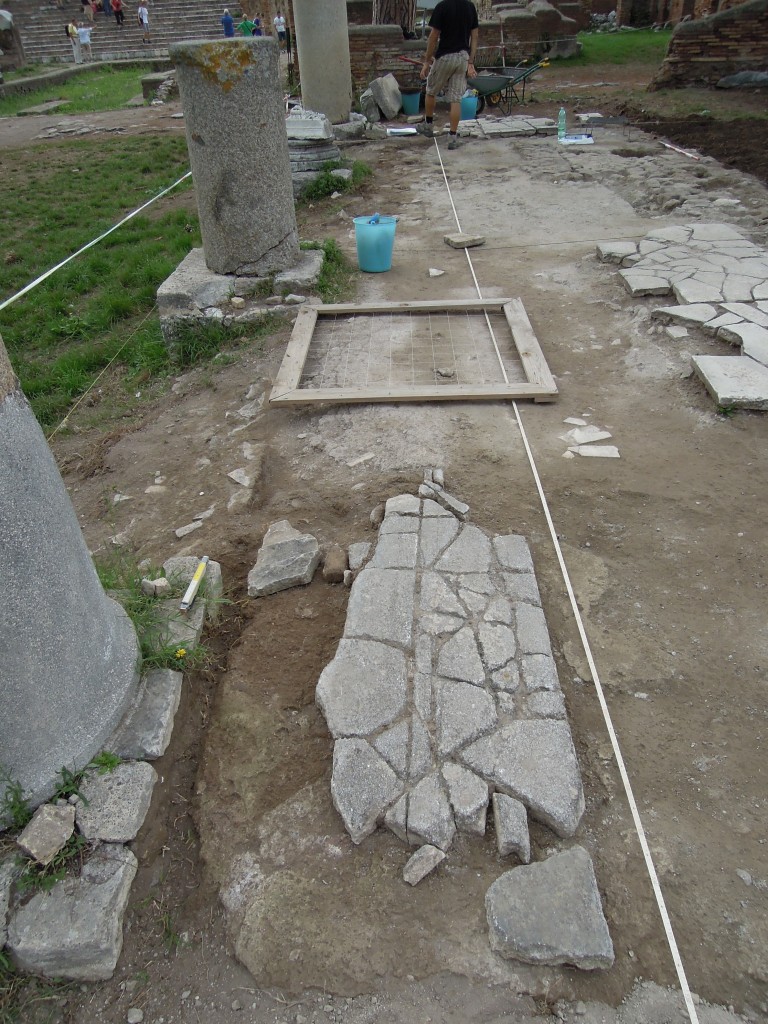 The same level-difference of 40 cm can be found between the imprint of a now removed late antique statue-base (see picture below) and the surface-level of the outermost wall of the portico MFP. This could be interpreted as the extension of the portico onto the former street area is completely late antique. This means that the local fill up to the level of the cut off pillars occured on both sides of the wall m1, which bisects the portico in two parts (inner-part from backwall to m1, outer-part from m1 to present granite-columns), in one singular event in Late Antiquity after a certain collapse-catastrophe. 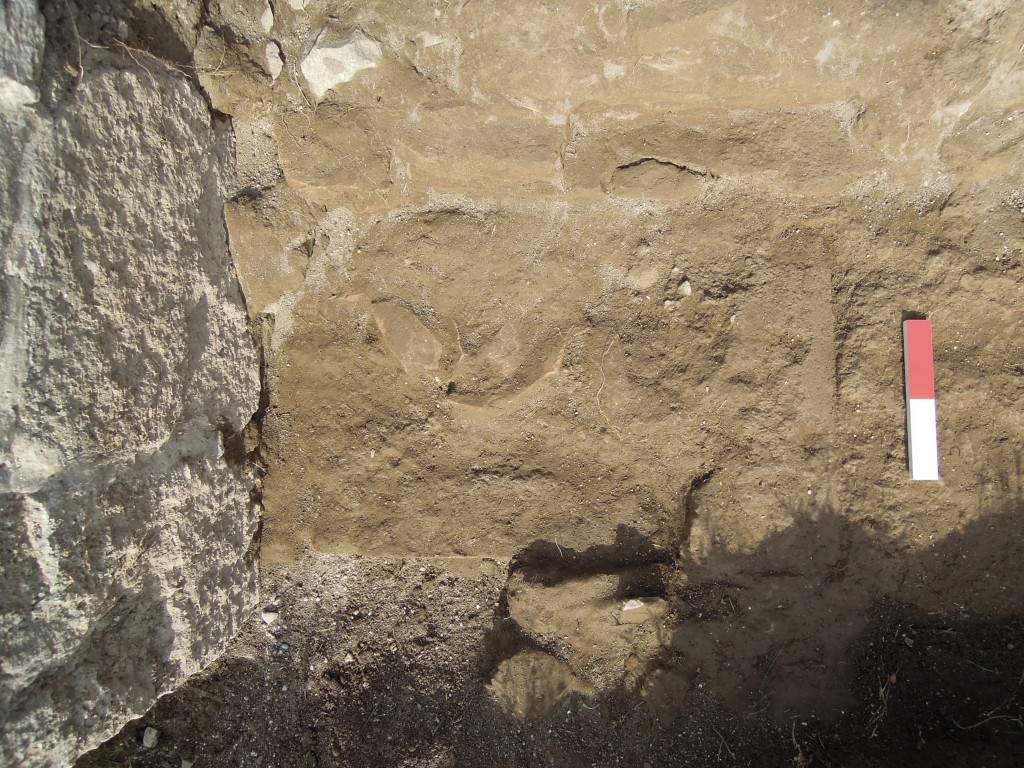 The final interpretation is still open, because an unfinished pavement of opus spicatum, with a later mortar-bedding just a few milimetres above, was found in the northern half of MFP in 2012 approximately 20 cm above the fundament-level of the cut off pillars. If we date this opus spicatum pavement to the late first or second centuries, we have in the north part of MFP a more complex stratigraphy than in the parts south of the apse, where the Augustan tabernae were cut off at a height of 2.20 m above see-level just beneath the present pavement. As a working-hypothesis, we can state following sequence:

1. Bipedales-fundament of pillars relating to street-level.

2a. Possible construction of inter-pillar wall?

2b. Level-raise of 20 cm in the inner-part and opus spicatum floor on top, but as part of an unfinished concept of tabernae, which were found in the northern part only.

2c. A similar level-raise in the outer-part with basalt? At this time, the pillars would still have been functioning.

6. Cutting of the pillars.

7. Pavement on top of pillars and outer-part.

9. Pavement on top of re-fill with wall-fragments A, connected to the areas of pavement above the Augustan tabernae.