When the this website was established in the Spring of 2014, our focus was on Late Antiquity. This was based on the intensive work conducted in the monumental centre from 2008 and onwards. In continuation to this, Prof. Dr. Axel Gering had worked on Late Antiquity in Ostia and elsewhere since the late 1990’s and early 2000’s. All this combined has provided a change perception of Ostia in Late Antiquity.

Due to the findings from 2008 and onwards, we could compare phenomena and patterns of late antique spolia reuse and renovations of pavement in the Foro della Statua Eroica (FSE) and the Forum’s area.

Furthermore, we extended our studies to the remains of the walls and architectural elements in order to reconstruct the Forum’s layout in its several building-phases. This is partly still work in progress since it is part of three dissertation projects in the Ostiagraduiertenkolleg (Theme 1, Theme 5 and Theme 6).

Regarding the hitherto conducted work, our working hypothesis has been that we can find common elements in the building histories of the hitherto analysed areas. This has allowed us to re-write the last chapters of Ostia’s history, the rebuilding of the Forum even after the end of epigraphic evidence from this site – exclusively based on new archaeological material. 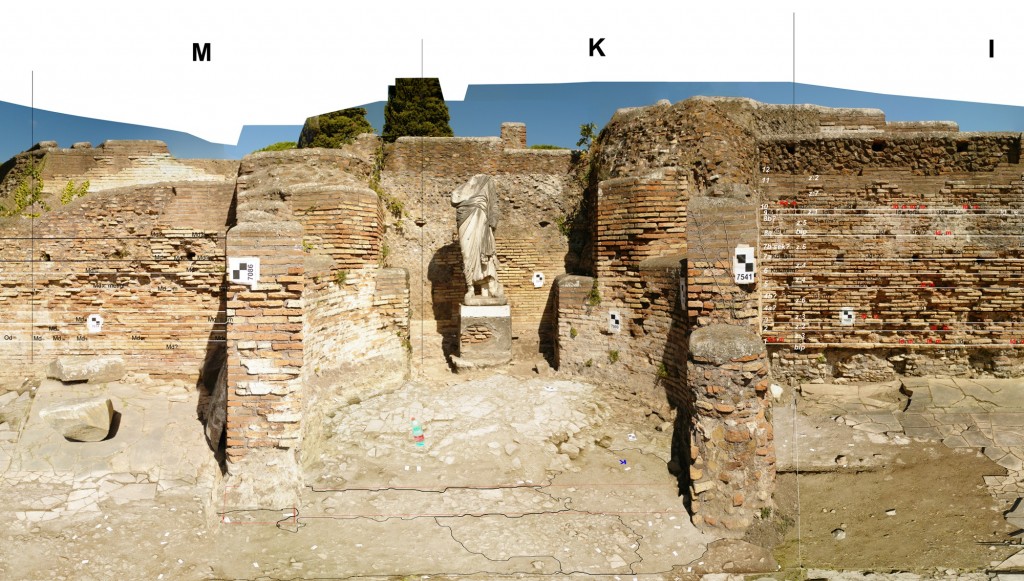 One of our aims was to date the major collapse events and the last Forum repairs of the 5th and 6th centuries and its later final collapse more precisely in accordance with our relative sequences of destruction layers and the mortar stratigraphy.

Another aim was to reconstruct the ‘lost’ stratigraphical evidence from the old excavations. By a simple archaeological fine cleaning of undocumented trenches and robbing pits from the 19th and 20th century, we were able to follow the Forum’s building history back to Augustan times and to its predecessors in the Republican period – this is a project being conducted in the Ostiagraduiertenkolleg (Theme 6). Especially due to the documentation of trenches with laserscanners we were able to draw and measure profiles and sections of building sequences along the walls, which had been partially excavated up until 1938, in a period where the dominant method still was to dig trenches along walls (so-called “wall-searching”).

By resurveying these often irregularly shaped trenches we found enough evidence to reconstruct two previously unknown monumental Forum layouts of the 1st century CE and some very interesting continuity of the Forum’s central round structure (MUN) into Ostia’s Republican past (“The ‘moving’ mundus”).

Until 2016, our main focus of interest was on Late Antiquity. Controversial to the simplifyed and often misleading interpretations of a ‘barbaric’ destruction or only one singular catastrophic event, which ended Ostia’s monumental architecture already in the 4th or early 5th century CE , we aimed to provide our new evidence of the latest building activities after several collapse catastrophies to the ongoing historical discussion about the areas of continuity or change of city life until the early Middle Ages (see e.g. these three chapters for more information). We have collected evidence that enables us to overcome some of the traditional ideas of the decay of the Roman Empire, which still rely on topic prejudices and the predominantly philological understanding of a closed chapter called ‘Antiquity’ present in historiography since the Renaissance.

In 2018, the final publication of our research concerning Late Antiquity in Ostia was published:

In 2016, when we emptied and began excavations in a room, TFR 2, in the northeastern area of the Forum, we discovered some interesting predecessor structures preserved under the Trajanic and Hadrianic tabernae. These predecessor structures, together with the Hadrianic and late antique phases provide the opportunity to analyse one room in the Forum’s area representing 1000 years of history!

All these discoveries have since been partly published on the website (here and here), and will also appear in articles and books in the future.

Due to all these discoveries and a vast amount of new evidence, we have changed our agenda to not only focussing on Late Antiquity, but equally focussing on these newly discovered structures, which bring us back to the very foundation of Ostia. Due to the vast amount of evidence, we have shaped our work in a way, where we have founded the Ostiagraduiertenkolleg, which consists of six ph.d. candidates working on different material from the excavations. Next to the Graduiertenkolleg, the Ostia Forum Project will continue its work in the Forum’s area, where the ph.d. candidates of course will participate.

The publications are now not only heading towards one major publication, but will consist of a book series titled Ostia Forum Project. Each candidate will be handed one book, and eventually all dissertations will be published in the series. The first book is reserved for the work of Prof. Dr. Axel Gering.