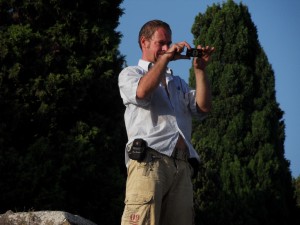 Axel is director of the project. He was born in Munich, Germany, which is also where he undertook his academic studies. He currently teaches at the Humboldt University in Berlin (HU), a post he took up around 12 years ago. Since 2007 he is Privat Dozent at the HU. His main interest regards the study of urbanism from the ancient Near East to the Roman West. This initially focused on the early imperial Roman period, but he has now moved on to specialise in the late antique period. His favourite archaeological find was the discovery of the street blockings at Ostia, and more recently the discovery of the previously untouched late antique Forum pavement.