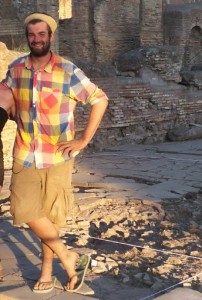 Michael studied archaeology at the University of Kent, England, doing his undergraduate and masters degree at the university. He was an excavator with the team for four seasons, and later spent six months working with Axel on the post-excavation work of 2009. Following his work in Ostia, Michael has continued excavating with commercial archaeology companies in England. He is currently employed by Cotswold Archaeology in the south west of England as a field archaeologist.