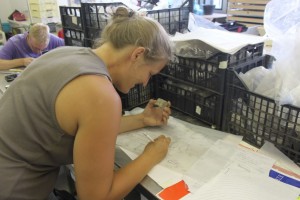 Lydia joined the excavation in 2009, and is therefore one among few persons who was able to witness the huge progress within the project since then. She was born in Westberlin in 1985, but started her academic studies in Konstanz. She returned to Berlin and finished her Bachelors degree writing about graffiti from Pompeii, which appeared in the trailer of the series “Rome”. She is right now finishing her Masters degree at Humboldt-Universität and wrote about the Grotta Azzurra in Capri.