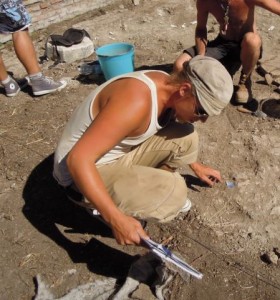 Anders is from Denmark, is 26 years old, and has been working in Ostia on three different campaigns. First in 2010 as field archaeologist under the British excavation team (BKO), then in 2011 as finds manager under the German excavation team and as of late in 2012, again as finds manager under the German excavation team. Anders is currently finishing his Masters degree in Religious Science at Aarhus University, but has a Bachelor degree in Classical Archaeology (also from Aarhus University). Anders will be continuing to work with the Ostia-Forum-Project in the future, and will be attending the 2014 campaign.