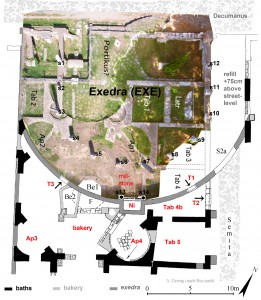 From 2002-2005, archaeological surface cleaning and excavation works were conducted by Axel Gering at the Terme Piccole (Ostia, I xix 5) and the Exedra (Ostia, I xii 3), generously supported by Sopraintendenza di Ostia and its director Anna Gallina Zevi and the co-director Angelo Pellegrino, and co-financed by a “Forschungsstipendium” of the German Archaeological Institute Berlin.

From 2006-2007, further excavation and survey activity took place in Ostia and sites in Turkey & Syria for the habilitation thesis of Axel Gering (see Project History and Project Publications 2010)

In 2007 during a colloquium in Darmstadt, a coorporation was planned with Luke Lavan to extend the Exedra-excavations into the area of the nearby Foro della Statua Eroica (Ostia, I xii 2).