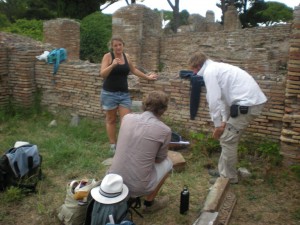 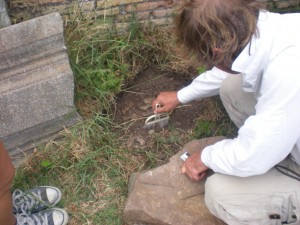 By sytematically checking the marble-deposits around the Forum, we accidently found a block of Carrara-marble with a half-polished back-side, a characteristic diametre of 15 cm and a low-relief ornamentation on its front (see pictures above and picture below). This marble-deposit at the Cardo was named CAW. The surface-find had been stored on top of an already cleaned surface of a shop. It could have been part of Calza‘s Cardo-excavations until 1941: Maybe – due to the historical circumstances – it was „forgotten“ in this area. It may have been excavated already in 1801-1805, because the shop could have been part of Petrini‘s old excavations, documented already by the sketch-plan of Holl in 1805 (published in the first volume of the ‚Scavi di Ostia‘, see Calza et al. 1953). Unfortunately, there is no documentation in the old diaries about this find, not even in the actual finds-books. 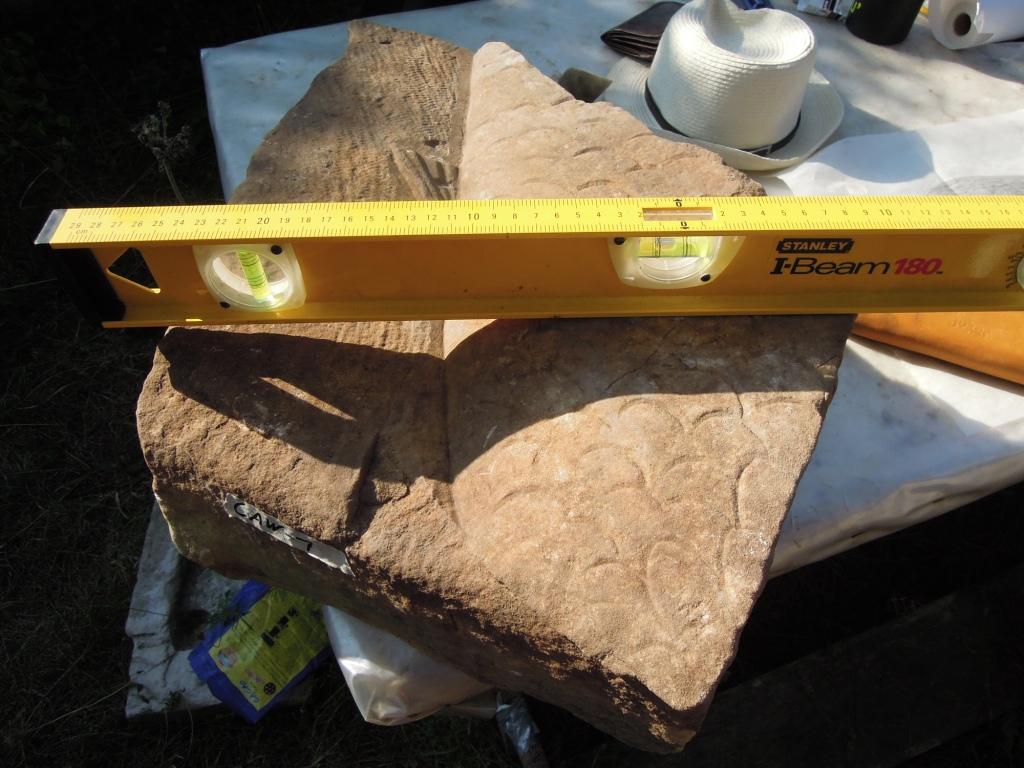 Therefore, we called it our ‚fish‘.
After the usual surface-finds documentation (the easiest we ever had), several theories were discussed: Was it a late antique sculpture, in the context of the legend of Jonas? Or a monumentally sculptured ‚advertisement‘ for a fish-market?
Once it was cleaned, photographed, measured, drawn and 3-D documented (see pictures below), we were able to exclude a late antique origin by stylistic dating. 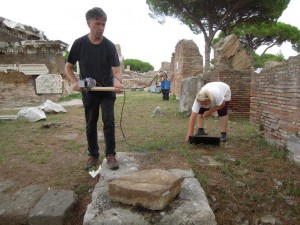 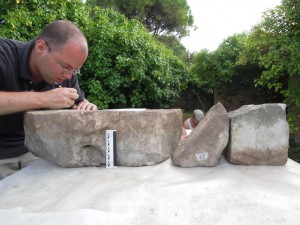 Soon we discovered the strange amount of at least three fins (see picture below). 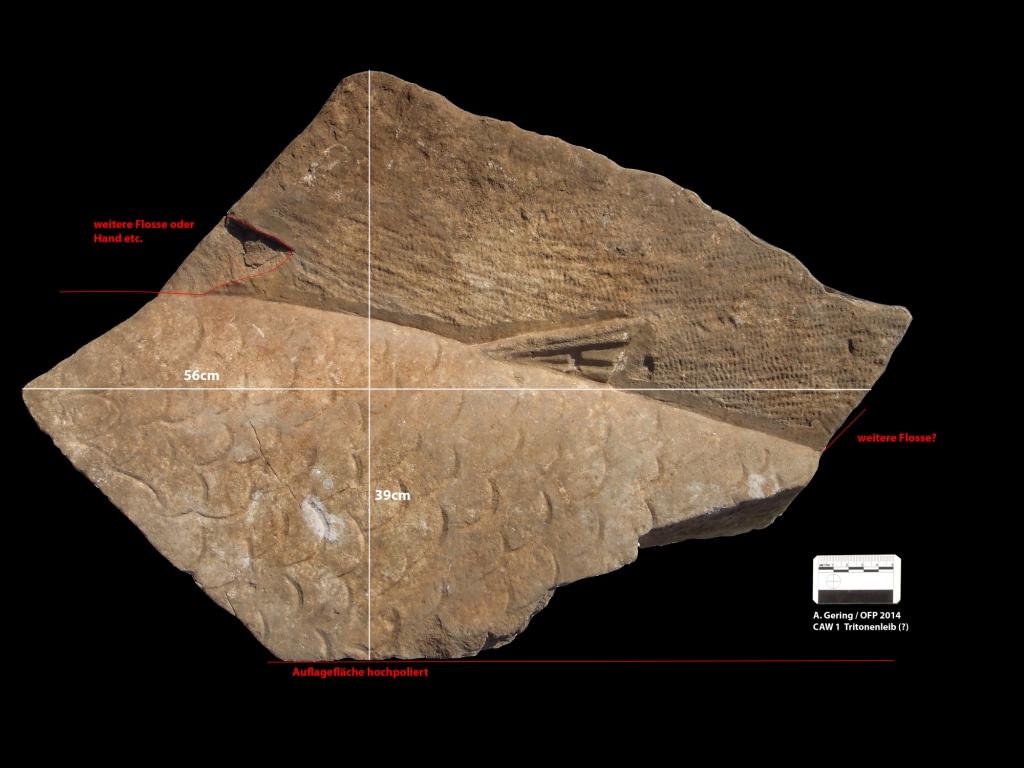 „Normal“ fish, which do not live in the hardly known areas of the ocean bottom, have hardly more than two fins: They could be excluded. Obviously, we had found a fragment of an originally longer fish-like tail, which could have belonged to mythological figures like Tritons, Nereids a. s. o. 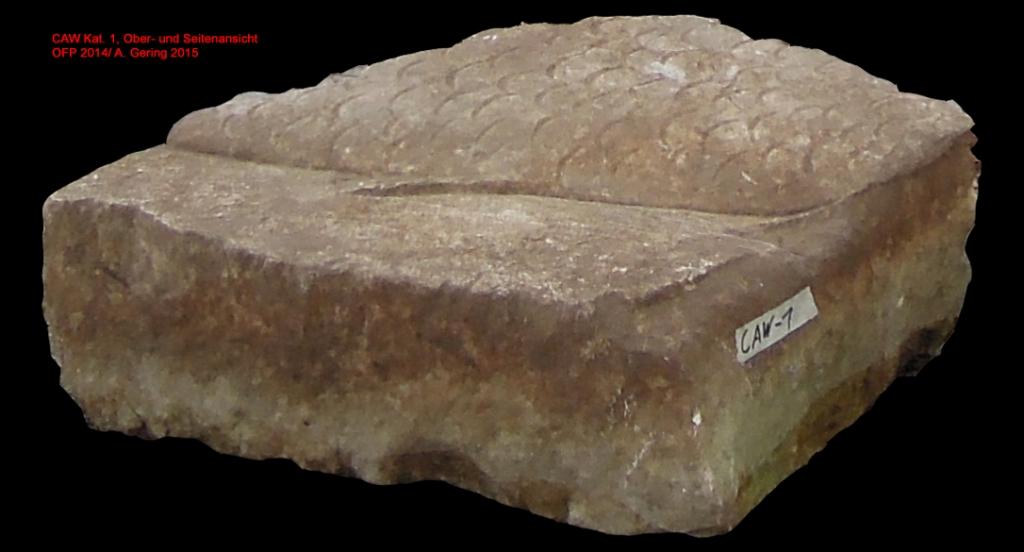 The material-quality, the surface-treatment and last but not least, the diametre of the marble-block seemed familiar: With 15,5 cm, it reminded us of direct parallels, mainly our wreath fragment (see Chapter 3). By closer examining its back-side, we also found some characteristic working-traces and dowel-holes, which had similarities to other supposed pediment-fragments from the Roma and Augustus temple!
But what was it exactly?

At first, we thought of a close similarity to the pediment of the temple at Baths, which was „transformed“ proportionally to our pediment with the angle of 22° (see picture below, compare the previous Chapter 3).

Tritons were ideal to fill the odd angle in pediments of all sizes (see picture above and below). 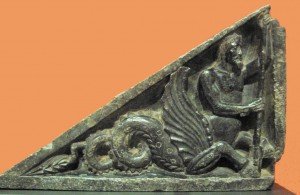 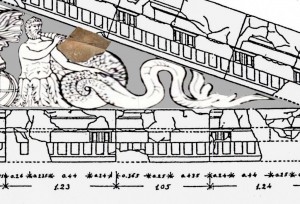 Triton-tails had the advantage that they could incorporate lots of fins. Therefore, our fragment could surely have been part of a Triton’s tail!
But soon some doubts came up again. The Victory holding the wreath (see previous Chapter 3) was too big to fit in the „proportional“ reconstruction showed above. Hence, there was no sufficient space for a real Triton.
Again, a look onto coins from Augustan times gave some inspiration (see pictures below). 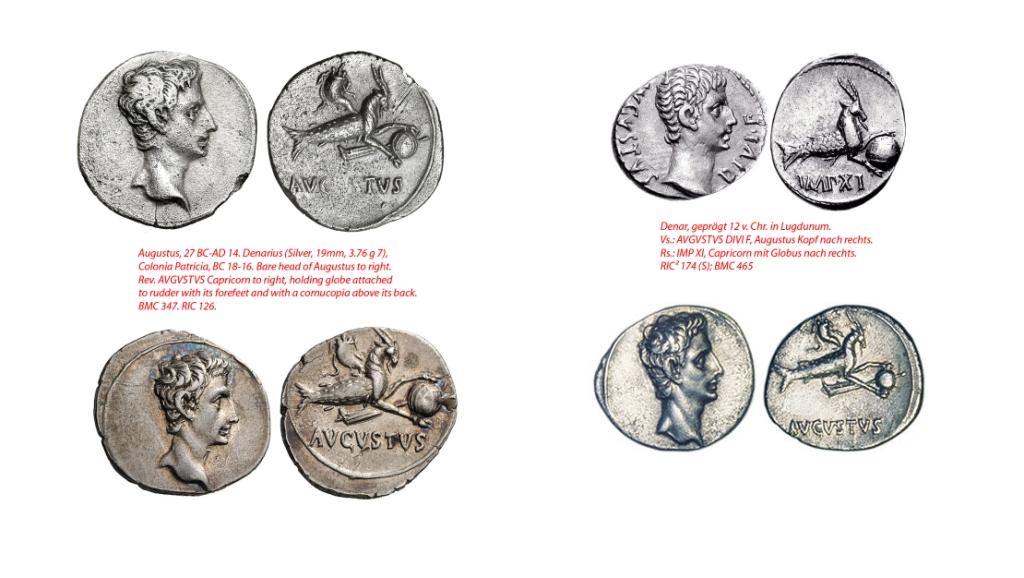 The so-called capricorn (see pictures above: A straight fish-tail at the back, a goat in front) fitted perfectly to the proportions of our fragment on one hand and of the proportions of the remaining space of the pediment on the other.
Our fish-tail was only rounded a bit in its front part. Its rear end was rather straight. So our fragment may have come from the part of the capricorn’s body, where fish and goat met (see the coins above).
But direct analogies, that means „life-size“-images of capricorns would have been a better comparison. Were there other capricorns in pediments? 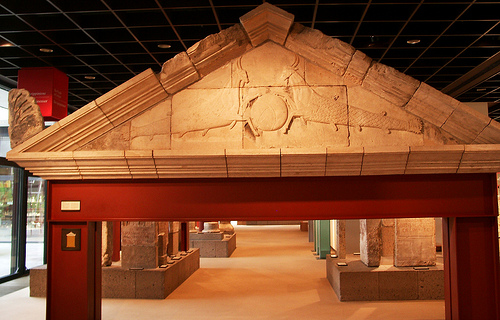 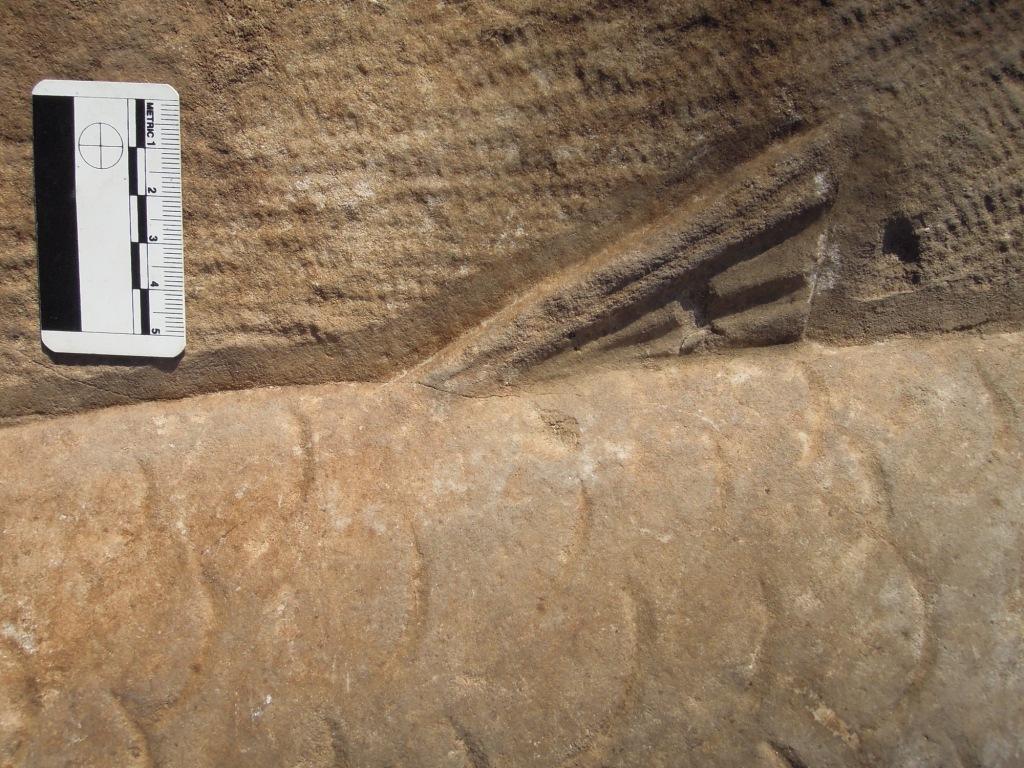 This stylistic feature seems characteristic for ‚provincial‘ sculpture, even in Augustan times, where art historians normally expect the maximum of quality in official art. But one must remember that our Ostian temple of Roma and Augustus had been a private donation, certainly of members of the local elite, but maybe still with certain economic restrictions (compare the discussion about the dedicatory inscription in Geremia-Nucci 2013).
By inserting our „fish“ into the Cologne-pediment, we received a possible reconstruction, which more or less even fitted our three fins (see picture below).

Roberta Geremia-Nucci has published another fragment, which was already found in 2005. This fragment turned out to be the proof for our hypothesis: It had exactly the same measures, low relief, chisel-marks and stylistic characteristics as our fish! And it showed the front of a goat, two feet, on the globe as seen with the pediment from Cologne!
Again, also the fragment of Matthia Pultrone and Roberta Geremia-Nucci could be easily inserted into the Cologne-pediment (see picture below)!

After inserting 23 further fragments, which we have hitherto identified from our marble pile, TDV, as parts of the pediment, we can fill Gismondi’s and Calza’s reconstruction of the Roma and Augustus temple from 1923 for the first time with the „missing links“, the pediment sculptures (see pictures below: The actual reconstruction of 2015 inserted into Calza’s pediment from 1923 and into the 3-D model of Ostia, published back in 2001). As this is still work in progress, our aim is to reconstruct the complete pediment with further proofs for all minor details soon in our new 3-D-model! 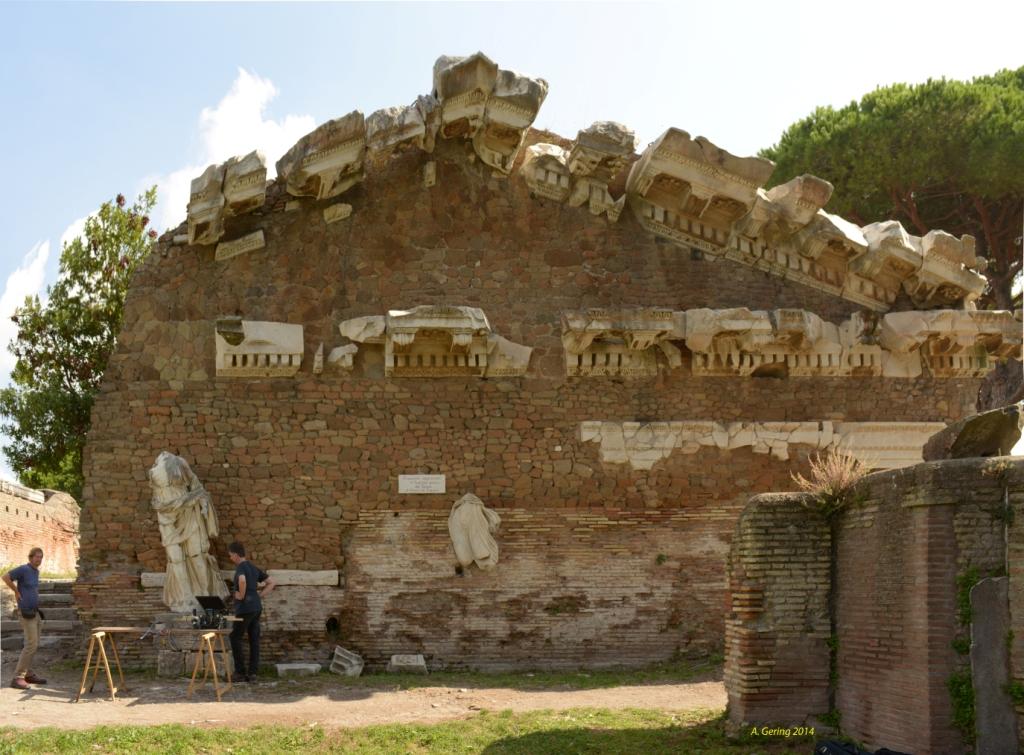 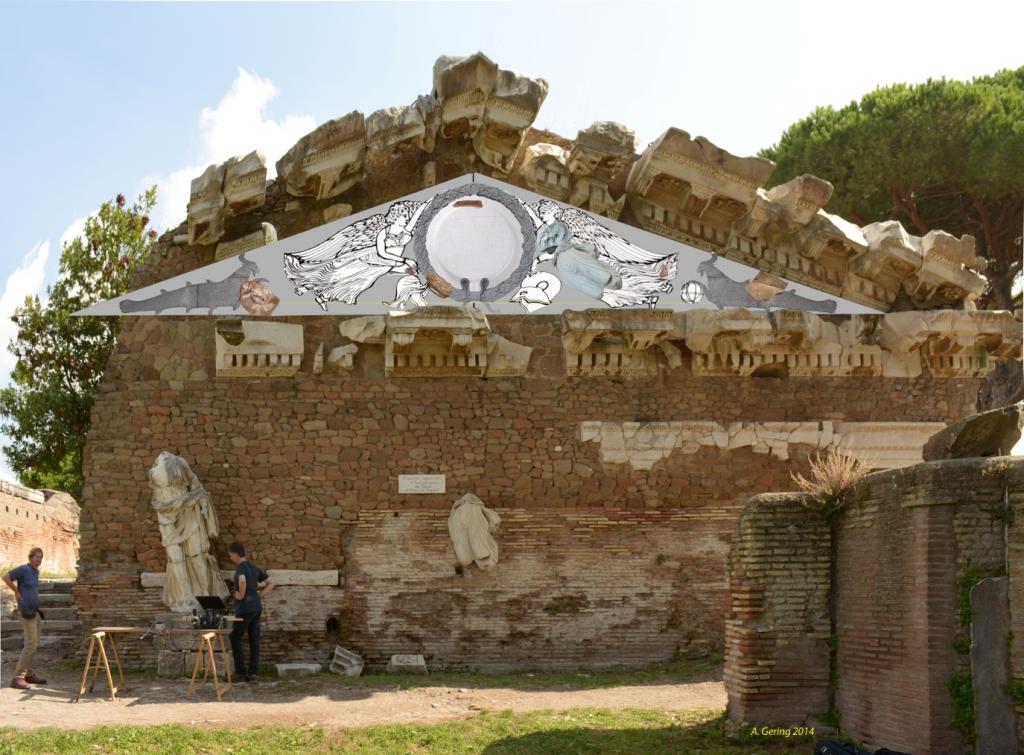 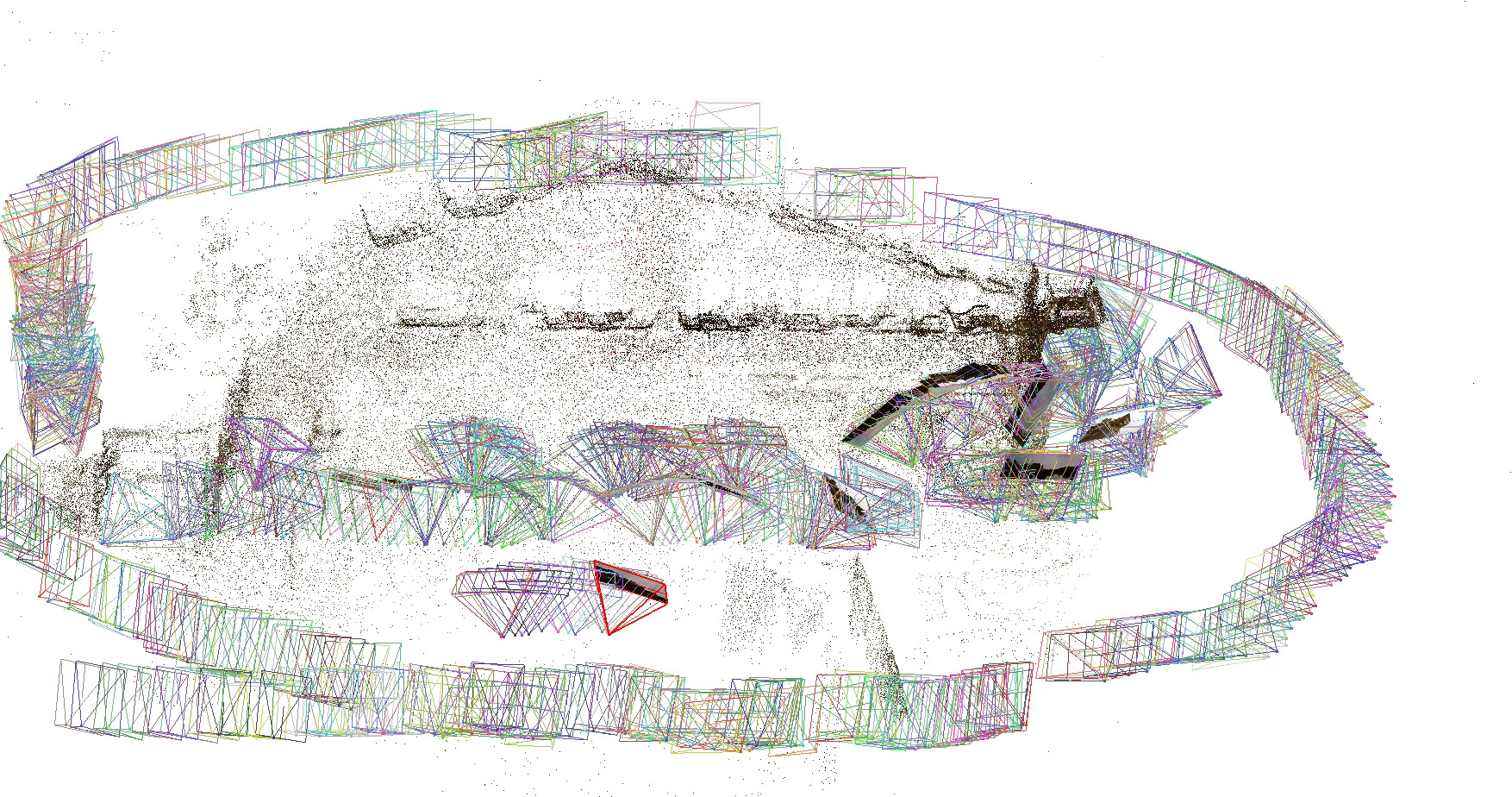 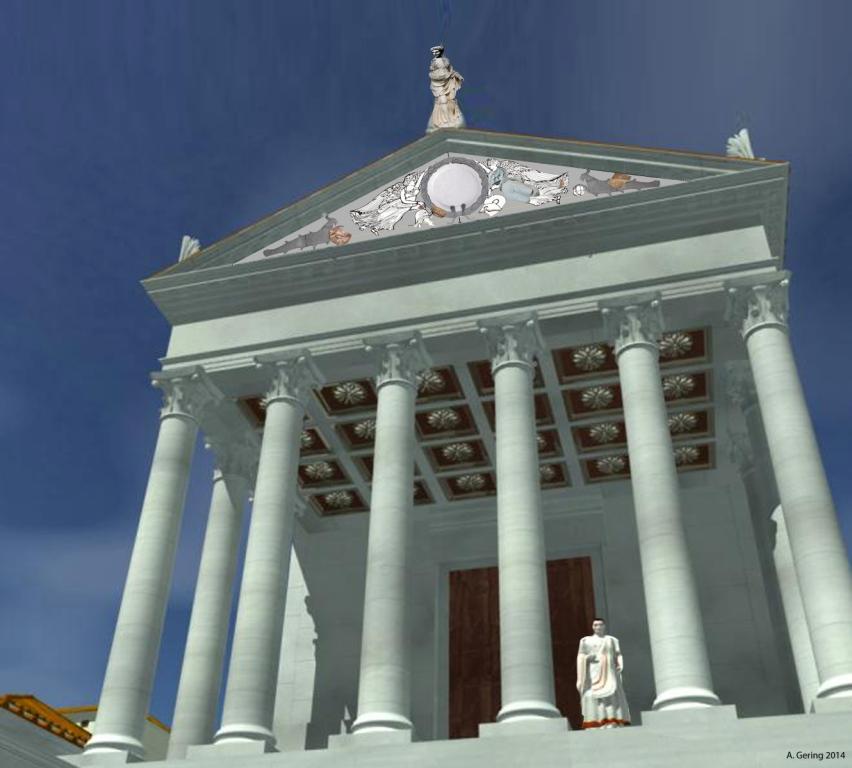 To be continued in Chapter 5!